WE TAKE DIVERSITY TO THE STREETS

As a teenager back in the 90’s, Giovani Ragazzon was in the car with his brother and friends – they were going to one of the boys’ father’s funeral. After noticing how quiet everyone was and how sad they looked, he thought about how strange the situation seemed. In an attempt to cheer them up, he began to tell jokes. His brother was so embarrassed he asked him to stop and said:

Man, what is your problem? Can’t you see how sad we all are?

He was known as “that clueless kid” who was a little bit weird, but kind-hearted. That’s what he heard people say about him after he jumped out of the second-floor window instead of going through the front door, or when he broke his arm when jumping from a moving swing. Giovani was described that way by his family and classmates, who didn’t know back then that those behaviors were, in fact, characteristics of the autism spectrum he’d be diagnosed with decades later

He got so used to people saying he was different that he began to believe it. Everyone took it so naturally that he just accepted that side of him as part of his personality. As an adult, before his diagnosis, he faced several challenges with Juliana, his wife, because of the way he related to people. When they got back home after visiting friends, he would always ask her if everything was ok and she would say yes, and he believed her, even if it was clear to everybody else that something was wrong between them. It is because Giovani has an objective view of things. If he is asked to do something, he will do exactly as he is told, and if anything was implied or expected that wasn’t stated clearly, he would not realize it. That is the reason why he created “acting mechanisms” to simulate reactions that he knew others would expect from him.

At age 39, he is now well aware of his limitations and talents – his ability with numbers and logical thinking, for example, which he developed during childhood, is now the base for his work as a software developer.

I’m appreciated for everything I’m good at. Everyone understands that differences exist and we can use them to our benefit.

This is the message of acceptance and appreciation that he tries to pass on to his children, Josué (9) and Eliseu (7). Even though he did not join SAP through the Autism at Work Program, Giovani feels very proud of the work that SAP is doing in regards to autism. “SAP is doing extraordinary things. We have hired more than 20 people on the autism spectrum in Latin America. All of that in less than 18 months. No other company has achieved so much. I hope this best practice will spread to the community.”

SAP’s groundbreaking Autism at Work program, launched in 2013, leverages the unique abilities and perspectives of people with autism to foster innovation as we help customers become intelligent enterprises. The program taps into an underutilized talent source, reducing barriers of entry so qualified individuals can fully develop their potential. Autism at Work employs over 140+ colleagues in 12 countries. In SAP Latin America & the Caribbean we are proud to employ 20+ colleagues.

When he was a baby, some of the things his eldest son did caught his mother’s attention – he did not look directly at her when she was breastfeeding him nor did he play the same games as other kids. For Giovani, it wasn’t such a big deal as he would do the same things when he was little. However, Juliana insisted, so Josué went from doctor to doctor until he was diagnosed with autism in 2010. That was when Giovani realized that if his personal traits were similar to his son’s, he might get the same diagnosis, so he began searching for an expert.

When he found out he himself was on the autism spectrum – specifically Asperger Syndrome he managed to better understand his own behavior and learn how to face day-to-day situations. His son’s diagnosis encouraged him to become a better parent.

Today, Josué has mild autism, but it used to be more severe. This improvement was only possible because of my wonderful wife.

Since he was diagnosed, Juliana took him to different professionals, from occupational to speech therapists.

Results are quite visible. There were times when Josué wouldn’t speak, but today he even takes part in school plays. Although it was emotional for Giovani to see his son on stage, the most important victory was when he learned how to tie his shoelaces on his own. Developing motor skills can be a challenge for someone on the autism spectrum – Giovani himself still faces difficulties when using scissors or writing in cursive, for example.

"Even before the diagnosis, we always embraced differences. Now that feeling has only grown. The greatest obstacle to our mission is society’s lack of knowledge. When someone on the autism spectrum feels unstable, which can happen in situations with too much stress or high visual or auditory stimuli, they might start screaming. That can be unexpected but should never be confused with aggressiveness. Our children are loving, which reflects our relationship with them. We always encourage them to show their emotions,” said Giovani, who once had to patiently wait on the sidewalk until Josué’s crisis was over. 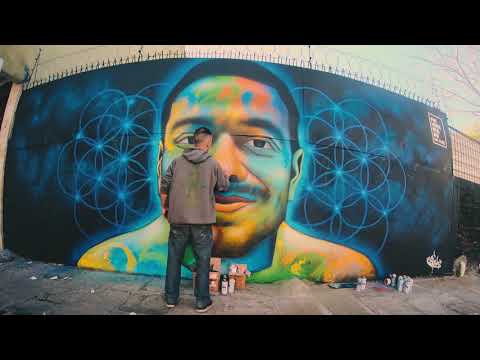 Press play to watch the production of Giovani"s wall.

Although people tend to be quite prejudiced, Giovani is not concerned with his children’s future. Recently, Eliseu was diagnosed with ADHD (Attention Deficit Hyperactivity Disorder) and they are now evaluating the possibility that he might be on the autism spectrum as well. I wish my sons nothing but peace and happiness, regardless of any external factors.

They can become soccer players if they want to, or sell beads on the beach. As long as they are fulfilled human beings, what else can I ask for?

To make your company more diverse and productive, click here.